All you need for building the WeatherStation Color and the PlaneSpotter Color.

78 in stock (can be backordered)

The ESP WiFi Color Display Kit contains all the components you need to build the WeatherStation Color and the PlaneSpotter Color project:

Please note: soldering is required with this kit

A step-by-step tutorial/guide is available on our own documentation platform.

Here are some of the awesome projects you can build with the Color Kit hardware:

With this project you can remote control your currently active Spotify player (smartphone, web player, dedicated device, etc) with an ESP8266! After the initial authentication and authorization with the Spotify API the device downloads the artwork from the currently playing song and displays the title and the artist’s name. Since the Color Kit comes with a touch screen you can also pause the song, continue to play and jump to the next and previous song. And if that is not enough you can extend our code control volume or other features offered by the Spotify API. In the demo video below you see the Color Kit on the left and for reference an iPhone 5 on the right. The music is played by the iPhone, not the Color Kit.

Do you need a case for the WeatherStation Color that is easy & quick to build yourself? Just print out our template, glue it on some card board (e.g. pizza box), cut it out and you’re done in less than 20 minutes!

If you are into 3D-printing you will find at least three designs on Thingiverse that customers uploaded: 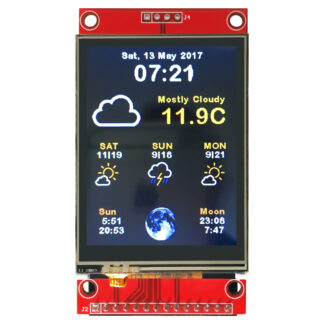